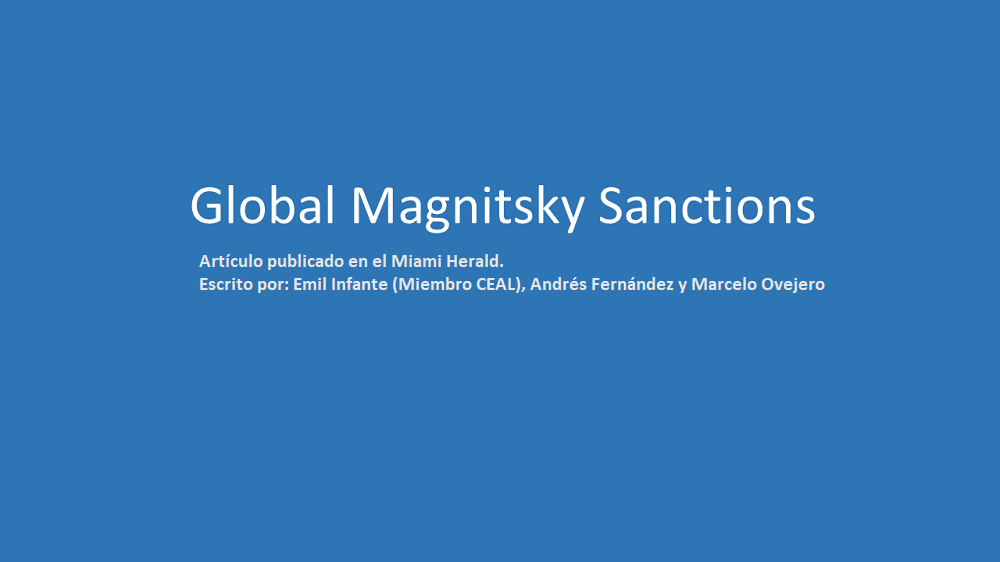 You have probably never heard the name “Magnitsky” before. Sergei Magnitsky was a Russian tax accountant who was incarcerated in a Moscow prison after investigating a $230-million fraud involving Russian tax officials. He died in 2009, after being severely beaten while in custody. The United States reacted to Magnitsky’s death by passing into law the Sergei Magnitsky Rule of Law Accountability Act of 2012 (a.k.a. the Magnitsky Act), a federal statute imposing economic sanctions on Russian officials who are thought to be responsible for his assassination.

So why is this so important to Latin America? Initially, circumscribed to the events in Russia surrounding Magnitsky’s death, the Magnitsky Act would later experience a massive expansion of its reach. On Dec. 23, 2016, the United States passed into law the Global Magnitsky Human Rights Accountability Act, which authorizes the president to impose economic sanctions on human right abusers and corrupt government officials anywhere in the world.

In the past year or so, the United States has been increasingly using these sanctions to target government officials in Latin America, most recently against Nicaraguan officials of the Ortega regime (including Ortega’s wife, Vice President and First Lady Rosario Murillo) accused of committing serious human rights violations during the recent anti-government protests where hundreds of Nicaraguans where killed.

An individual or entity sanctioned under the Magnitsky Act is summarily included in the Specially Designated Nationals And Blocked Persons (SDN) List, a “blacklist” maintained by OFAC. This occurs after an administrative investigatory process where the subject individual or entity has very limited opportunities, if any, to intervene in order to avoid being sanctioned.

Once an individual or entity is blacklisted by OFAC, all of its assets in the United States, or in possession or control of U.S. persons, are blocked and cannot be dealt in in any way. Put simply, a Magnitsky sanction is the equivalent of a blanket prohibition to engage in any transactions with the sanctioned individual or entity.

The Magnitsky sanctions clearly make for risky business in Latin America. Companies are strictly liable for violating these sanctions (meaning that “we did not know we were dealing with a sanctioned entity” is not a defense), and yet the penalties potentially at issue could be very harsh, including significant fines and imprisonment. Companies and individuals operating in this region are therefore required to protect themselves and their investments, by adopting strong compliance measures to ensure adequate prevention and a swift reaction when a violation occurs in order to mitigate the consequences.